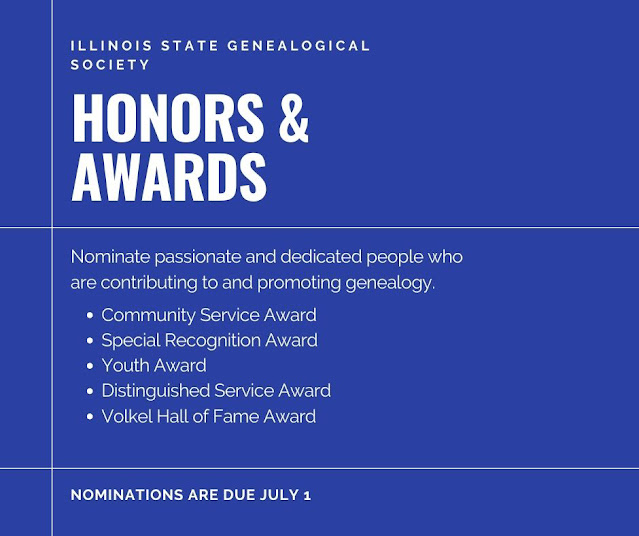 The Illinois State Genealogical Society invites you to make nominations for our annual Honors and Awards.
In our genealogy societies and communities, we see dedicated people who are innovative, passionate, and welcoming; those people help Illinois genealogy societies to flourish and encourage folks to continue learning and researching their roots.
The purpose of the ISGS Honors and Awards is to recognize and honor those who are contributing to and promoting genealogy. We encourage you to make nominations for the following awards:
● Community Service Award: This award may be given to an individual, company, or institution for service or contributions to genealogy. Nominations may be made by local genealogical or historical societies.
● Special Recognition Award: This award may be given to an individual for the promotion of genealogy in general or for having been a major influence toward the success of the nominating organization. Nominations may be made by local societies.
● Youth Award: Students are eligible for this award for a genealogical project. Nominations may be made on the suggestion of a teacher, advisor, or local society.
● Distinguished Service Award: A national figure may be honored for exceptional contributions or service to genealogy.
● Volkel Hall of Fame: Presented during odd-numbered years posthumously in the name of a person who has contributed generous services toward the field of genealogy in an exemplary way for ten or more years.
Awards will be presented at the annual membership meeting during the ISGS Fall Conference. Societies can make one nomination per category. Award nomination forms must be used.
For more information and nomination forms, please click on following links:
● ISGS Honors and Awards Summary
● ISGS Honors and Awards Nominating Form
● Volkel Memorial Awards Summary
● Volkel Hall of Fame Award Application Form
© 2021, copyright Illinois State Genealogical Society