Online Resources for Researching your Illinois Ancestor who Served During WWII 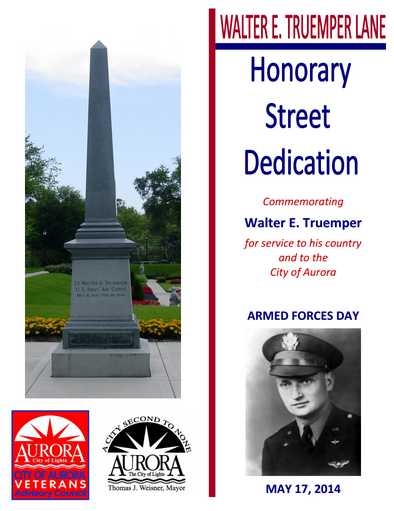 2nd Lt. Walter E. Truemper, born in Aurora, Illinois, was killed in action on 20 Feb 1944, during a flight combat mission to Leipzig, Germany. Truemper and the flight engineer, S.Sgt. Archie Mathias, refused to abandon the plane and its wounded pilot. The two attempted to land the plane, but sadly, all three men were killed in a crash landing. Truemper and Mathias were posthumosly awarded the Medal of Honor for their bravery and refusal to leave their wounded comrade. Truemper is the only Aurora soldier to have received this highest military honor; a monument was erected in his honor at Philips Park in Aurora, and a street was named for Truemper in 2014. (kanecountyconnects.com)
Tomorrow marks the 79th anniversary of the attack on Pearl Harbor in Hawaii, and America's entry into WWII. Are you researching an Illinois ancestor who served during the war? Be sure to bookmark these resources!
ISGS would LOVE to hear your ancestor's story and share it with others- consider submitting your WWII ancestor's story to the ISGS Quarterly! Contact isgsquarterly@ilgensoc.org for more information.
The Digital Archives contains several collections pertaining to WWII:
The National Archives has digitized a 1946 report of Illinois casualties that is searchable by county.
Local newspapers are a great way to learn about local men and women who worked at home or overseas to support the war effort. Newspapers are searchable by county; look for collections that cover the WWII years.
Genealogy Trails includes a list of WWII prisoners of war from Illinois, both those who died as POW's and those who were liberated.
An online listing of soldiers that have been awarded an ISGS Military Certificate. The database can be sorted by war to review those who served in a specific war. Don't see your ancestor? Consider submitting them for an ISGS Military Certificate! Learn more by clicking here!
And DON'T FORGET to inquire with your local genealogical or historical society- they often keep detailed records pertaining to local soldiers and military service. ISGS has a list of our Member Societies with contact information and links to their websites!
© 2020, copyright Illinois State Genealogical Society