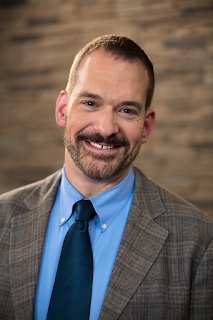 Dr. Michael D. Lacopo was born and raised in
northern Indiana surrounded by extended family always willing to tell tall tales. Intrigued by his maternal family’s claim to be kinfolk of Abraham Lincoln, and his paternal family’s stories of murder and mayhem, he took
to genealogical research in 1980 to substantiate these family stories.
Genealogical research as a hobby was in its infancy in the 1980s. Combing libraries, archives, cemeteries and courthouses as a teenager, Michael gained the skills needed to become a keen researcher. His first major challenge in the world of research was tackled by finding his adopted mother’s birth parents in 1982. You can read about this adventure at his blog at Roots4U.blogspot.com with some engaging story-telling, plot twists and new findings!

Although a budding genealogist in the 1980s, Michael completed his doctorate in veterinary medicine in 1991, while still spending time honing his research skills. As befitting a doctor, Michael treats his genealogical research as he would medicine – carefully, methodically and completely. Several genealogical journal articles and publications appeared along the way. In 2013, Michael retired from his medical career to pursue genealogical research full-time as a profession. He has contributed to numerous periodicals and has helped numerous people in their quests to locate their relatives – living and dead. He appeared in USA Today in 2000 discussing genealogy and the proposed destruction of the federal census tabulated in that year. His national lecturing began in Sacramento, CA, at the National Genealogical Society’s national conference in 2004, and has continued with several local, state, national, and international conference speaking engagements to this present day.

Michael's interests and strengths include Mennonite research, German and Swiss research, especially as it pertains to the 18th century immigration to America, among many other topics. He makes many trips throughout the Mid-Atlantic and Midwest states chasing ancestors in primary repositories, and also devotes a considerable amount of time to European research, being proficient in reading German script. Having ancestors from many geographic locales as well as immigrants spanning the 17th century to the 20th century, Michael has a wide variety of proficiencies. He believes that as genealogists we should tell the tales or our ancestors and is a vocal proponent for learning the social history that interweaves our ancestors into the fabric of the past.

ISGS is thrilled to welcome Michael Lacopo as one of our 2019 Fall Conference keynote speakers! Michael was kind enough to take the time to talk with us about some of his past and present genealogical adventures...!

How did you become interested in genealogy?  How long have you been researching?
I was raised in a family with very few cousins my age. Holidays usually involved a slew of great-aunts. Bigger events involved great-great-aunts, and I was fascinated by the stories they told. I was making charts and diagrams showing everybody’s relationship when I found a book on genealogy at the local library at the age of thirteen. It was then that I realized there was a name for something I was already doing. I have been hooked ever since. That was forty years ago!

Who is your favorite person (ancestor or otherwise) to research? Why?
I am a sucker for a good challenge. The more “unsolvable” the genealogical problem, the more likely I will take it on. I don’t believe in “brick walls”.

What has been a defining moment in your career as a genealogist?
There are many. I found my mother’s birth mother in 1982. I published my first family history in 1985. My first national speaking engagement was in 2004. I quit my “real “ job in 2013 to chase dead people full time. I identified my mother’s birth father via DNA in 2014. I hope more defining moments are in store!

What are you most looking forward to at the ISGS annual fall conference?
I love speaking, and I love teaching. If everyone leaves with just one new tool to find their ancestors or to analyze the information they already have, I will consider it a successful conference!

What should conference attendees look forward to at your lectures?
I like teaching by example. I often use case studies in my lectures so people can see what I am teaching in practice. More generally, I have a passion for what I do, and that is something they will see when I lecture!

·    Is there a genealogist or a historian that you look up to? Who and why?
No specific name comes to mind, but there are many good genealogists and historians that may stimulate me because of my personal interests (Pennsylvania German, German/Swiss research, Mennonites/Anabaptists, genetic genealogy, etc.). There may be some absolutely amazing genealogists specializing in, for example, French Canadian research, and I’d have no idea who they were. Read, read, read…. and you will find the leaders in your field. I also like that the question asks about “genealogists or historians”. You just cannot be a good genealogist if you are unable to put your ancestors into historical context. Social history is so, so important to doing good research.

Can you tell us about some of your recent or upcoming projects?
I always have too many irons in the fire! Watch for a website upgrade that is more interactive (http://www.roots4u.com). My long-neglected blog is past due for revisiting with new stories and cliffhangers (http://roots4u.blogspot.com). Publication efforts are in the making. And so much more!

The 2019 ISGS Fall Conference, "Connecting the Dots...DNA, Research and Ethnicity" will be held on October 25-26 in Naperville. Register TODAY!