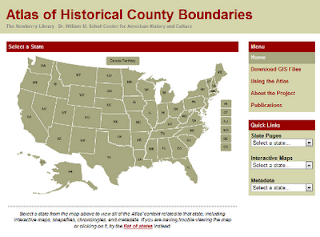 The Newberry Library is pleased to announce the completion and release of its Digital Atlas of Historical County Boundaries, a dataset that covers every day-to-day change in the size, shape, location, name, organization, and attachment of each U.S. county and state from the creation of the first county in 1634 through 2000.

Nearly every aspect of American life can be described, analyzed, and illuminated through data gathered and organized by county or available in county records, and knowing how and when boundaries changed is often the key to finding and understanding great quantities of historical data. For example, a farm may have been in one family for many generations, but over the decades changes in county lines may have effectively moved that farm from one county to another. When looking for old family records, how does the modern genealogist know which county seat will hold great-grandmother’s marriage certificate? How does an attorney know which county seat recorded the deed to great-great-grandfather’s farm?

In addition, population figures are commonly aggregated at the county level, but comparing statistics from one enumeration to the next may not accurately reveal actual change. Was a change in the figures from census to census due to population movement or to a change in the boundaries of the reporting counties, or to a combination of both?

With the Newberry’s Atlas of Historical County Boundaries, genealogists, geographers, historians, political scientists, attorneys, demographers, and many more now can find accurate county data that will greatly assist them in their research.

The data are organized by state and are available online in four versions:


The project began in 1988, with principal funding provided by the National Endowment for the Humanities, an independent federal agency. Additional support came from the Newberry Library, which also served as headquarters, and from other foundations and individuals. The Newberry Library is the copyright holder; all files of the Digital Atlas of Historical County Boundaries are free for use under an Attribution-NonCommercial-ShareAlike 2.5 Creative Commons License. Queries should be addressed to scholl@newberry.org. The Website for the Atlas is publications.newberry.org/ahcbp.